Geoffrey Chaucer Hath a Blog calls for a celebration of ancient languages. I’m not sufficiently confident in the pronunciation of languages that are in any case no longer spoken to follow suggestions involving putting up videos, but I can certainly write about some of what I learned from Orrin Robinson’s book Old English and Its Closest Relatives.


I’ve already discussed Gothic, but to recap, it was spoken primarily in the east of Europe in Roman times, some of its speakers playing important roles in the collapse of the western part of the empire, though generally ending up on the losing sides of subsequent struggles. It’s the oldest Germanic language for which any substantial body of writing still exists; and (not uniquely) religious writing is well-represented, in this case a translation of the Bible by one Ulfilas.

While the language may have hung on to the sixteenth century in the Crimea, those Goths who migrated into western Europe stopped speaking it long ago; Roger Collins states there is no evidence of the language being used in Visigothic Spain from the sixth century, and in any case it ceased being Visigothic in the early eighth century, by which time the Ostrogothic kingdom in Italy was also long dead.

There is plenty that an English speaker might find familiar:

You may be able to spot others, as well as some familiar names.

Ulfilas wrote in the Gothic alphabet, a derivative of the Greek alphabet. His work survives in the sixth century Codex Argenteus: 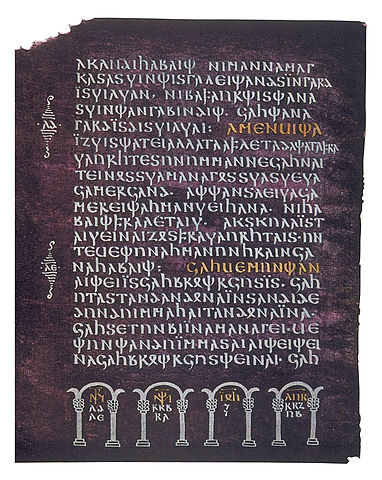 Old Norse was the language of the Vikings, though the texts in Robinson date from some time after the Viking age - so the best part of a millennium after the Gothic above, and perhaps longer than that since the common ancestor of the two languages. (Jordanes thought that the Goths ultimately came from Scandinavia, something that may or may not be true; nevertheless it’s clear that these languages share an origin.)

Its main modern descendants are Icelandic, Danish, Norwegian and Swedish, though English has borrowed plenty of Norse words too, as a result of Viking settlement. Many are considered (particularly northern) dialect though some, such as “take” and “sky” are absolutely standard.

Again, some words should be more or less familiar:

The ending of fellr and fuglar reflects a sound change in Old Norse relative to Proto-Germanic. (Plural birds in Gothic remains fuglos, for instance.) Some runic inscriptions distinguish the sound in this position from ‘r’, suggesting that the process of change was incomplete when they were made; or at least recent enough that people remembered and cared about older spellings. Robinson gives as an example the inscription on the Horn Of Gallehus:

Look for ᛉ just before the first and second dotted word divisions; this represents the sound changing from ‘z’ to ‘r’. Just before the final word division is ᚺᛟᚱᚾᚨ or horna, meaning “horn”. (The exact letter shapes may not be the same in your runic font, if you have one, as in the inscription.)

Robinson doesn’t emphasise this but as I understand it, the was/were distinction in English reflects the same sound change (*was-/*wezu- in Proto-Germanic, with z becoming r).

Old Saxon was a language spoken in northern Germany in early medieval times. Robinson reckons that the Saxons mentioned in Ptolemy merged (peacefully or otherwise) with other local tribes to form a more substantial confederation, forming the origin of raiders of Britain (supplying at least their name to the Anglo-Saxons) and northern Gaul (Gregory of Tours mentions “Saxons” in what is now Normandy, in the sixth century). Between the sixth and ninth centuries they came increasingly under Frankish domination.

At the time I read the book, I found this a leap forwards in similarity to English; when I first revisited it this didn’t seem particularly plausible but being able to list out the obvious cognates for an entire sentence like that is probably the kind of thing I was noticing.

Although it’s not visible in the line above, the convention in this language was to use th to represent the “th” sound, long before this was universally adopted in English.

The most important Old Saxon text is the Heliand, an epic poem retelling the story found in the gospels and probably written in the ninth century: 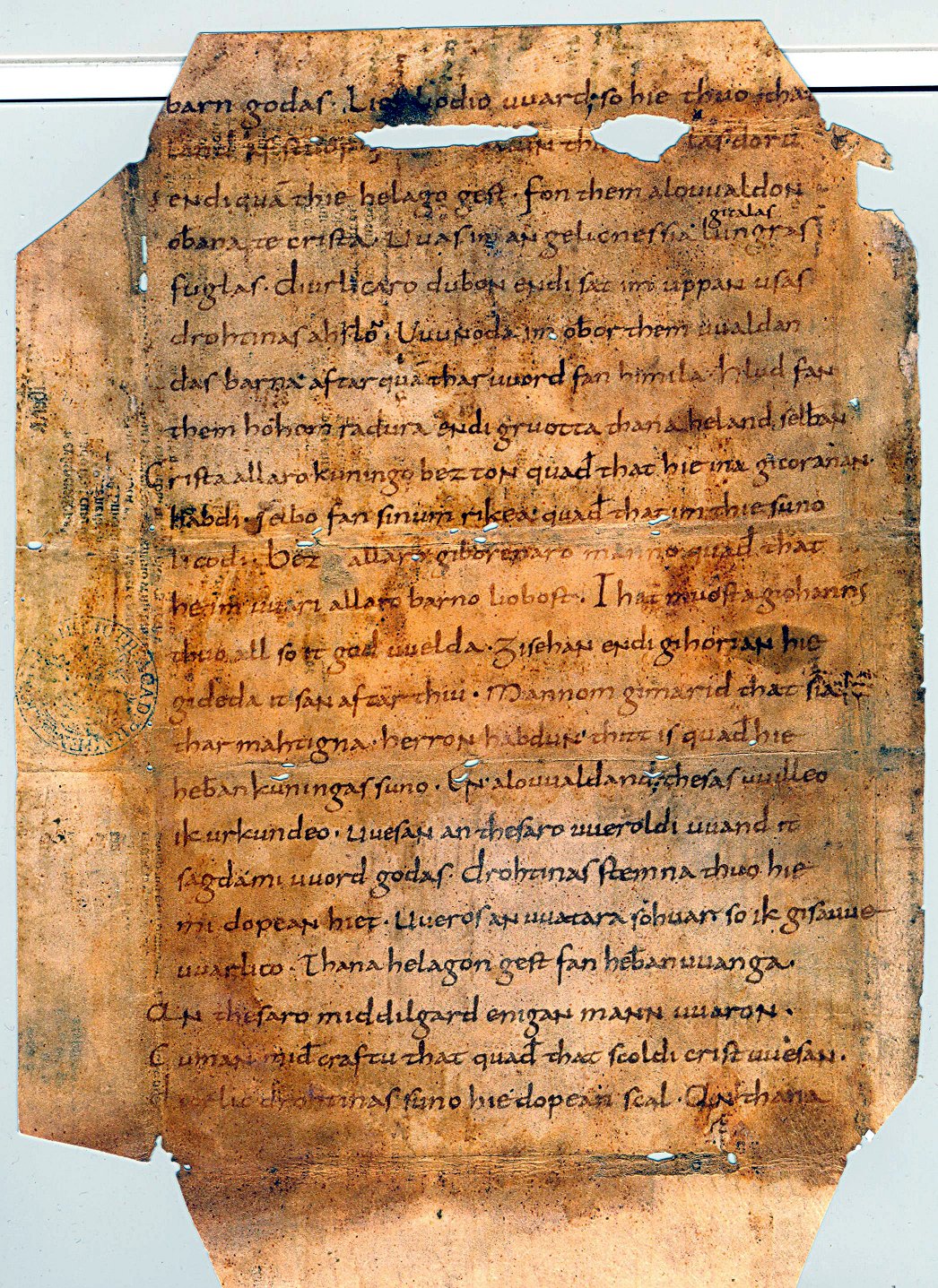 Old English is of course the most direct ancestor of the language we speak today, albeit one that has undergone a millennium of continuous change. Of the other languages in this book its closest relatives are Old Saxon and Old Frisian (below).

It seems to have been introduced in the British isles starting in the fifth century. Bede thought the various kingdoms of England corresponded directly to immigration from “Old” Saxony, somewhere called Angulus (held to be the precursor of modern Angeln) and the kingdoms of the Jutes, wherever they may have been at the time; all he seems to know is that Angulus was between Saxony and the Jutes. At any rate the general region of Saxony and Frisia seems plausible given the prior references to troublesome Saxons, the identical names and the similarity of language.

In this case it seems more appropriate list the words without obvious modern equivalents:

One of the more famous Old English texts is the Anglo-Saxon Chronicle, initiated under Alfred the Great and updated over the following years: 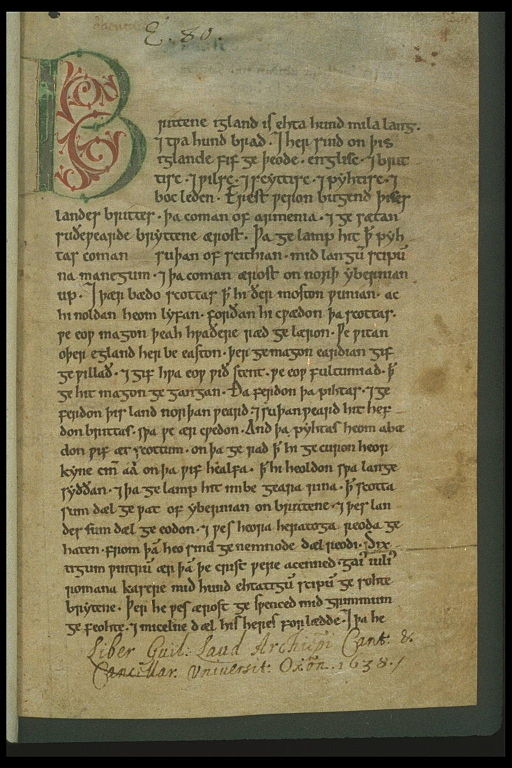 “Frisians” are mentioned in Tacitus and in early medieval times Robinson has them occupying most of the coastal regions from Belgium to the the Elbe, a range which has since declined. The Old Frisian texts he describes are late medieval in origin. Its descendant, Modern Frisian, is said to be the continental language closest to Modern English, despite something like 1,500 years of divergent development.

On several occasions I’ve amused myself, and possibly my guests, by reading a passage in Old Frisian at them to see if they can figure out what it is.

In contrast to the Goths, Saxons and Frisians, the Franks were among the winners of the post-Roman situation in western Europe, despite their unhelpful traditions of partible inheritance managing to establish an empire that by the ninth century extended to most of modern France (to which they gave their name although not their language) and Germany and northern Italy, not to mention the smaller various smaller countries now filling the gaps between them. Old Low Franconian is very badly preserved, the corpus consisting of several very shoddy copies of a document probably from the tenth century. It is an ancestor of a dialect of Dutch.

Robinson gives the related Old West Low Franconian but a single paragraph, reflecting the even more desperate state of its preservation:

“All the birds have begun nests except for you and me - what are we waiting for?”

Old High German is distinguished from the other Germanic languages by a characteristic set of sound shifts, the results of which should be familiar to anyone who learn a bit of modern German at school: compare penny with pfennig or ten with zehn, for instance. The “high” is the opposite of the “low” in Old Low Franconian, or for that matter in the Low Countries, contrasting between the uplands of south with the plains of the north.

Any errors in the above are no doubt mine rather than Robinson’s!